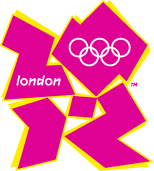 Having worked at the 1994, 1996 and 2000 Olympics, and been raised in Atlanta and lived through the fun that was (pre-Grey’s Anatomy) Izzy, I have a personal interest in Monday’s announcement of the logo for the 2012 Olympics in London. To say what was unveiled Monday has gotten a negative reaction would be an understatement. In just one day, thousands have signed a petition calling for the logo to be scrapped and an animated version of the logo was pulled Tuesday from the official website because of concerns that the footage’s flashing lights would cause epileptic seizures. Niiiiiiice….

I didn’t even realize the imagery represented the numeric 2012 date upon first glance. It’s been referred to as a swastika, and I don’t think that’s too far off. I think it’s a jigsaw puzzle piece gone awry.

On the left is a look at the old logo. As one BBC blog put it, this one doesn’t fit on cell phone as nicely, which is the medium of choice of the kids these days, which is apparently the audience organizers were targeting.

London 2012 organizing committee chairman Seb Coe says this logo "… will define the venues we build and the Games we hold and act as a reminder of our promise to use the Olympic spirit to inspire everyone and reach out to young people around the world.

"It is an invitation to take part and be involved. “

Yack. Someone needs to get this guy some training. Is that really how he speaks?

Seth Godin has already done a fine job of explaining the process of logo development and deployment. Creativity is subjective, but I think most are in agreement that what the London 2012 organizers put forth is atrocious.

What do you think of the logo?

Someone once tried to "explain" Izzy to me too. If one's logo needs a whole lotta explaining, then that oughta tell someone something, eh?!

Sad. Simply terrible. I wonder what the runner up logos looked like (although I guarantee you they were better.)

And to make matters worse, the firm that designed is a very well know (graphic design) English firm and the committee paid something like 400,000 pounds for this little scribble.

I bet you it was one of those things were somebody at the firm said: "who cares, do one or two ok designs and present them together with whatever other scribbles we come up with in the next 5 minutes..."