Palm doesn't want to get lost in the shuffle 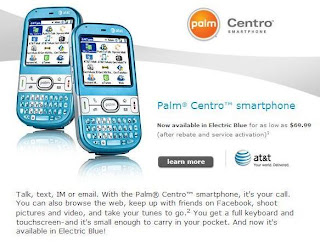 I have received two emails in two days from Palm touting their Centro smartphone. With today's launch of the new iPhone, I guess Palm is trying to do its best to keep their product in the collective consciousness of telephone shoppers.

It's a nice idea, but I think it's a reach for Palm to think the Centro could be a replacement for an iPhone.

And today's message (at right) is pretty weak in my opinion. The call-to-action ("learn more") is buried and the font size touting the new color is awfully small. The new color feature is touted in the subject line - Palm(R) Centro(TM) smartphone now in Electric Blue on AT&T - but I think it should be written as prominently as the "Palm(R) Centro(TM) smartphone" headline above it.

OK, end of rant. But I will end by giving Palm credit for adding features to its phone and having a compelling reason to send today's blast. I just hope they set their expectations accordingly.
Posted by Sandi K. Solow at 4:38 PM