At least they didn't pick Chewbacca 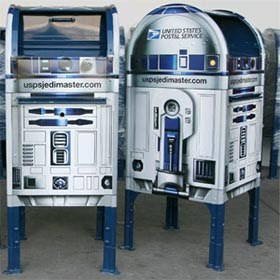 I saw on TV recently that the U.S. Postal Service had partnered with Lucasfilm to transform the standard blue mailbox into an R2-D2 look-alike. At first glance it seemed kind of clever. But as I gave it more thought, it seemed like an odd marriage to me. To learn why this unholy union took place, I discovered the USPS is helping celebrate the 30th anniversary of Star Wars. So there’s some benefit to George Lucas in this agreement, but what about the Post Office? Mack, over at the Viral Garden, has made some good points about this promotion, but I guess I don’t see much of a benefit for our friends in blue who deliver snail mail.

Yes, there’s a lot of buzz about these boxes (this post included). And I can see Mack’s argument that this gives the USPS a bit of personality. But these boxes don’t create a reason for me to go buy stamps. Seeing R2-D2 outside my post office isn’t going to send me rushing inside to buy some postage. Now I will admit that a lot of Star Wars junkies probably will buy stamps they wouldn’t have otherwise because they collect anything and everything Force-related. But is the buzz factor enough to warrant the costs associated with activating this promotion for the USPS? You tell me. I just don’t see there being much additional demand for stamps just because we can feed our letters into an R2-D2 mailbox.

In the meantime, I hope the Force is with my mailman. Given the pollen outside, he needs some sort of protection.